Meghan, the Duchess of Sussex is the number one style icon of the world. During many social events Meghan has proved she has style and finesse when it comes to choosing her outfits and accessories. Everyone remembers the Givenchy haute couture wedding dress and the Stella McCartney reception gown which she teamed with such stunning jewellery.

Both Prince William and Harry have gifted pieces of Princess Diana’s jewellery to both Kate and Meghan to wear on their wedding day. Kate’s sapphire and diamond engagement ring once belonged to Princess Diana when Prince Charles proposed back in 1981.

In Meghan’s three stone diamond engagement ring the central diamond comes from Botswana and the smaller outer diamonds were taken from Princess Diana’s collection. For the evening reception Meghan wore a very special Asprey 24ct gold Aquamarine and diamond three stone cocktail ring which Harry gifted to her which belonged to his late mother, Princess Diana of Wales. It is believed to have been commissioned by Diana to match a pearl and aquamarine bracelet she already had. Diana was first spotted wearing both the ring and matching bracelet during a trip to Sydney in 1996. Then in 1997 at a private auction of her dresses, she was photographed wearing the stunning ring on its own for the very last time. The aquamarine itself is estimated to be around 30 carats.

Megan wore Diana’s aquamarine ring again during the couples Royal tour visit to Tonga adding a pop of colour to here monochrome look of a sleek white gown by with a black Givenchy clutch and Aquazzura heels. As Meghan and Harry are expecting their first child whilst visiting Australia, New Zealand, Fiji and Tonga for their Royal Tour we think it’s extremely appropriate that she took the aquamarine ring with her as it was once believed to be used by sailors as a talisman of good luck, fearlessness and protection (known as the ‘sailor’s lucky stone’). Today it protects all who travel by, over, or near water. It was also thought to alleviate sea-sickness as well.

Queen Elizabeth II was given a necklace and earrings made with deep blue aquamarine gemstones as a gift from the President and People of Brazil in 1953. She loved the blue aquamarine colour so much that she had a tiara commissioned with aquamarines in 1957. 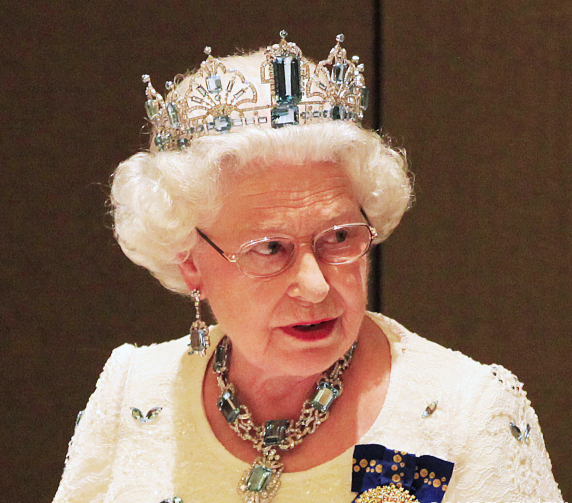 Like Emeralds, Aquamarine is also a type of beryl. Aquas vary slightly from blue-green to blue. They can be quite dark or have just a hint of colour. The darker aquamarine gemstones are considered more valuable than the pale blue stones.

Aquamarines is also known for it’s healing properties of soothing unpleasant emotions such as grief or loneliness. Aquamarine is also known to enhance feelings of peacefulness by encouraging inner strength and bravery, whatever the situation. Highly protective during pregnancy, it helps to guard both mother and baby from harm. It is also said that it’s calming energies reduce stress and quiet the mind.